The creator of the iconic cartoon sitcom The Simpsons has finally revealed the inspiration behind the show's fictional town of Springfield.

Matt Groening told Smithsonian magazine he based the town on Springfield, Oregon, but since it is such a common US place name he knew many would think it was their own Springfield.

The Springfield question is one of the best-kept secrets in TV history.

The Simpsons is the longest-running show in the US, on air since 1989.

Characters in the show have often joked about hiding Springfield's real location.

"In anticipation of the success of the show, I thought: 'This will be cool, everyone will think it's their Springfield.' And they do," Mr Groening said. 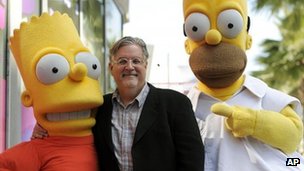 There are thought to be at least 34 towns or cities called Springfield in the US.

Mr Groening also said he was inspired by the TV show Father Knows Best, which was set in a place called Springfield.

But the Springfield in Oregon is just 100 miles (160km) south of Portland, the city where Mr Groening grew up.

The Simpsons has sometimes given false answers to the question of Springfield's true location, leaving open the possibility that Mr Groening's latest comments are a continuation of the joke.

In one episode, Marge and Homer Simpson's precocious daughter Lisa points to Springfield on a map, but the audience's view is obscured by Bart Simpson's head.

It appears that the town of Springfield, Oregon, has known of its connection to the sitcom since 2007, when Mr Groening visited before the release of The Simpsons Movie.

"Oh, okay, we knew that," a community relations manager told the Associated Press when she heard about Mr Groening's latest comments.